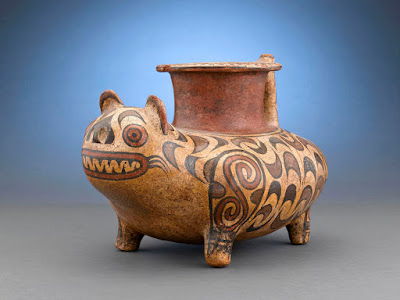 While much of Europe was in the throes of the artistic and social decline known as the Middle Ages, across the Atlantic, the ancient cultures of the Americas were experiencing a vibrant cultural period distinguished by fascinating works of art, particularly pottery.
The Pre-Columbian era generally refers to the span of time in the Americas prior to the voyages of Christopher Columbus in 1492. However, the term more accurately describes the history of Native American cultures before significant contact with or conquest by Europeans.
Regardless of the location in either North, Central or South America, archeological evidence proves that all of these cultures were incredibly proficient in ceramics. Since many Pre-Columbian cultures lacked formal writing systems, pottery became their history books–a visual vehicle to express and pass on their knowledge of the world, encompassing religion, cosmology, philosophy and even astronomy.
M.S. Rau Antiques’ collection of Pre-Columbian artifacts was assembled by a private collector in the 1960s and covers various cultures throughout Mexico and Central and South America from about 1800 B.C. to A.D. 1530. Many of these wares were used to venerate important figures in society, while others served more mystical purposes by depicting shamanistic rites and spiritual awakenings. This West Mexican Nayarit Warrior Figure with Staff was crafted in honor of a great warrior chieftain. Imagery including the baton, large horn-like extensions atop the head and seated posture are notable symbols of high social standing.
The peoples of Central America had a particular affinity for animal symbolism, as illustrated by this Veraguas Feline Figure from Panama. Most likely used as a ritual vessel, these animal-centric forms often referred to shamanistic transformations, giving animal qualities to individuals undergoing a spiritual transformation.
These ceramics are more than remarkable works of art, they provide unique insight into the fascinating ancient cultures that shaped our history.
Click here to view M.S. Rau Antiques’ entire collection of Pre-Columbian artifacts. 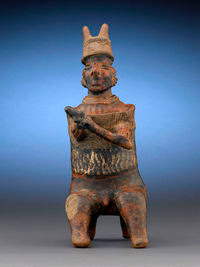 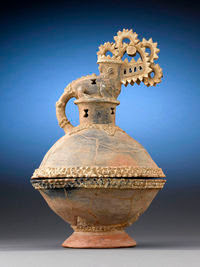 Source link for above text and images:
http://www.artfixdaily.com/blogs/post/5404-windows-into-a-lost-world-pre-columbian-pottery

Link below has a collection of Pre-Columbian artifacts.
https://www.rauantiques.com/catalogsearch/result/?q=pre-columbian
Posted by Laura Mongiovi at 11:02 AM No comments: 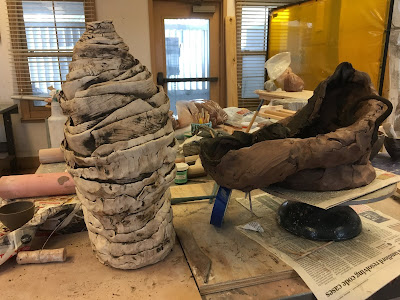 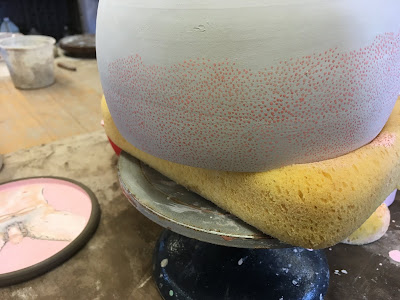 Posted by Laura Mongiovi at 11:59 AM No comments: